5 Math Games with a Deck of Cards: Subtraction 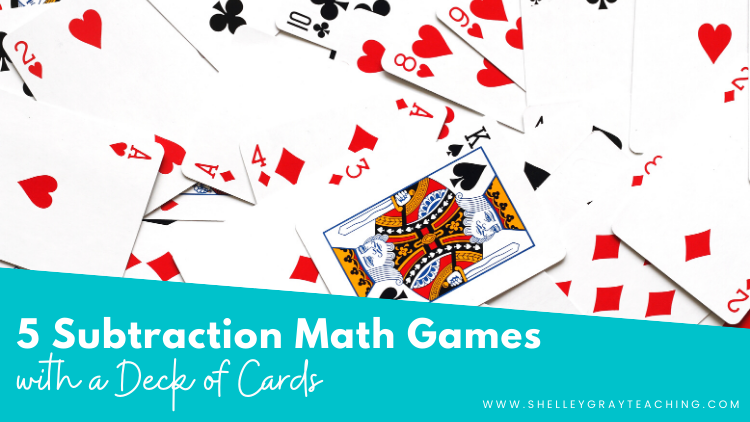 Many math games can be played with a single set of cards as individuals, with a partner, or in small groups. Playing cards are a great tool to have available for extra practice, a fun math center, or even an enrichment activity. Here are five different math card games that will keep your students motivated, engaged, and, most importantly, having fun, all while strengthening subtraction skills!

Each player starts the game at 100. Each player can take one card per turn and subtract the number they get from 100. To win the game, a player must be first to reach zero. If all the cards have been drawn from the deck, the player who is the closest to zero wins. Jacks are worth 11, Queens are worth 12, Kings are worth 13, and Aces are worth 0, or whatever number is agreed upon.

This game can be made more challenging and involve addition, too. Simply have each player draw two cards per turn, adding those numbers together, and then subtracting that total from 100. Adjusting the value of the face cards can also increase the difficulty of the game.

If you are working with upper grades, students could start the game at 500, choose two cards per turn, multiply them, and then subtract that total from 500. The options are endless!

This game is perfect for practicing multi-digit subtraction problems. The goal for each player is to generate a subtraction equation with a difference that is closest to 50. For example, if you are practicing subtracting 3-digit numbers, each player would draw six cards per turn. Whoever can create an equation with a difference closest to 50 earns one point. If a player can create a difference of exactly 50, they receive two points. The first player to reach five points wins. Pencils and paper or whiteboards and markers will most likely be needed.

This game requires many cards per turn, so once the deck is gone, just reshuffle and continue until there is a winner. Face cards are advised to be taken out of the deck for this game, but if you’d like to add a fun twist, you could assign a value to each face card. Or, consider removing the face cards but keeping Jokers. Jokers could be a wild card, and students may choose it’s value if they happen to draw it.

This is the perfect game to practice regrouping and could easily be completed as an individual center activity instead of a game. Begin by removing all of the face cards and 10s from the deck. Aces are worth 1. The players each draw two cards, placing the smaller number on top and the larger number on the bottom. Next, each player draws another two cards. This time, the larger number goes on top, to the left of the first number. The smaller number goes on the bottom, to the left of the second number. Now the student is presented with a 2-digit by 2-digit subtraction problem and must practice regrouping!

You could declare the winner by whoever has the smallest or largest difference, or even by whoever has an even or odd difference and award points accordingly. If this activity is completed as an individual center, multiple students can share the same deck of cards.

With two players, begin by removing all face cards and 10s. Aces can be worth 1 or 0. Split the deck in half and give each player their own stack. Together, players turn over their first four cards to create two 2-digit numbers. They may put the cards in any order or position they choose, with the goal being to create the greatest difference. The player with the greatest difference takes all 8 cards.

You can simplify or increase the difficulty by turning over fewer or more cards. When working with larger numbers, this is a great opportunity to practice place value!

The more, the merrier with this game! It can be played with 2 players, but students will have more fun in groups of 3-5, as it makes it more exciting! Jacks are worth 11, Queens are worth 12, Kings are worth 13, and Aces are worth 0 or 1.

The dealer will exhaust the deck to all players. Players keep their cards in a small stack in front of them facing down. The dealer gets to start by turning over 1 of his cards and placing it in the center. He then subtracts his card from 100. The next player flips over her top card and puts it in the center on the dealer’s card. She now subtracts her card from the new total.

For example, if the dealer flipped over a 7, the total is at 93. If the next player flips over a Queen, the new total is 81. The player who subtracts the card that gets the total to 27 or less, takes all the cards from the center and adds them to their deck. The game continues until someone is out of cards. Whoever has the most cards wins!

I hope you can use some of these subtraction card games in your classroom! Card games are easy to differentiate to ensure that each student is appropriately challenged. So don’t be afraid to change the rules, values, etc. to ensure that students can experience success but also be challenged. 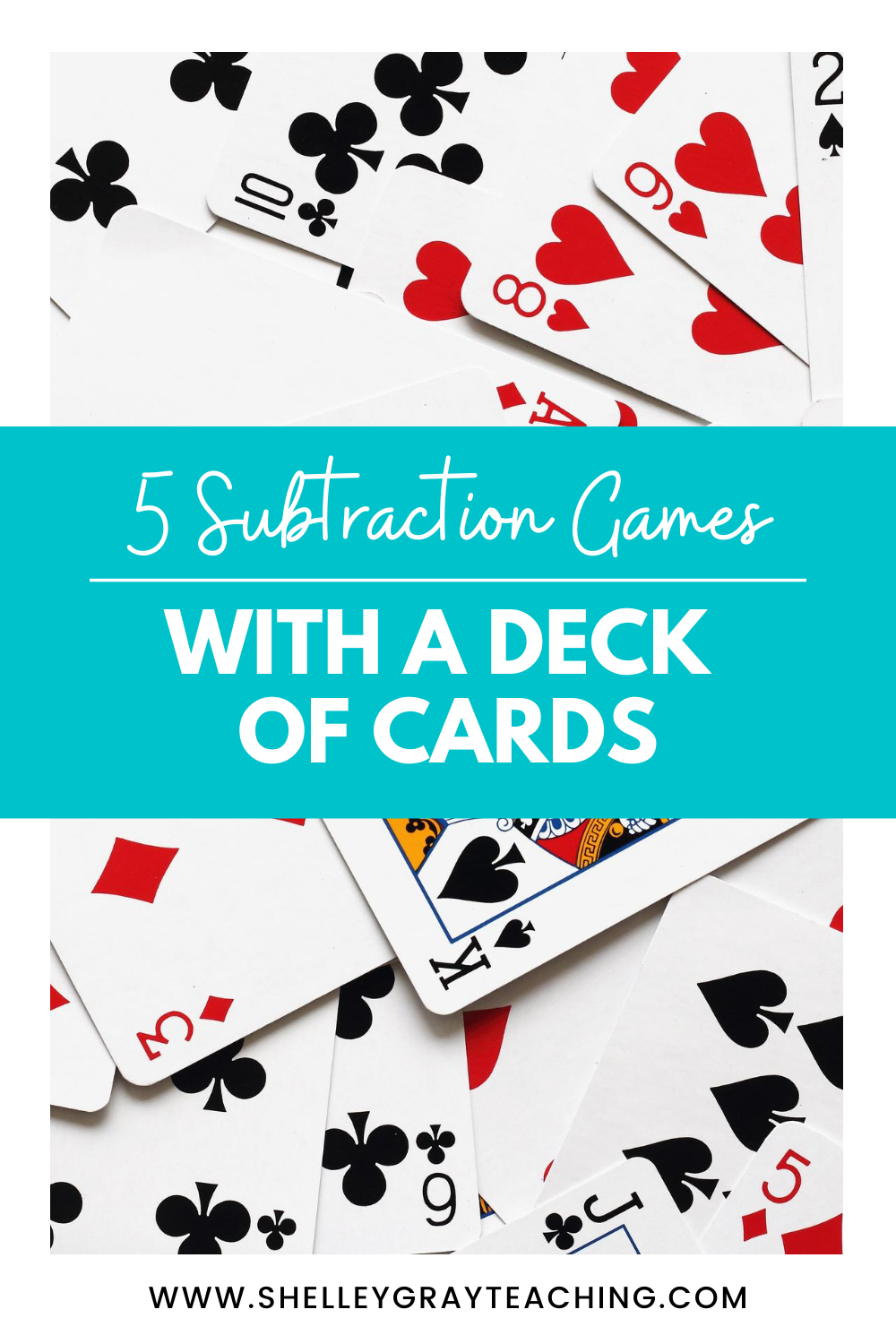 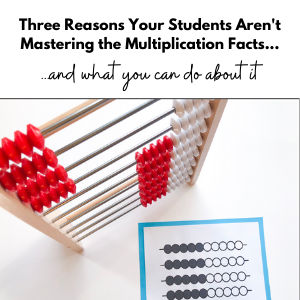